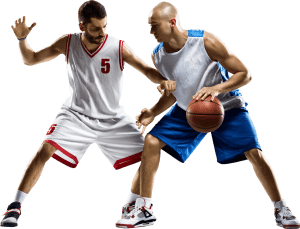 Kevin Porter played 10 seasons in the National Basketball Association. He was first drafted in the 1972 NBA Draft in the third round by the Baltimore Bullets, a now-defunct team. He ended up moving to the Detroit Pistons from 1975-1977, then the New Jersey Nets for one season and then back to the Pistons for another season. He finished his NBA career with the Washington Bullets (1979-1983). Porter relocated to the Philippines Basketball Association with the Toyota Super Corollas in 1983.

Cedric Ceballos is a world traveler when it comes to basketball. He was drafted in round 2 of the 1990 NBA Draft by the Phoenix Suns. After playing for the Suns for 4 years, Ceballos went to the Los Angeles Lakers for 3 seasons. He went back to the Suns for a season before rotating between the Dallas Mavericks, Detroit Pistons, and Miami Heat. After the NBA, Ceballos played for the Harlem Globetrotters and teams in Israel, Russia and the Philippines. He became a part of the PBA when he played for the San Miguel Beermen in the 2003-2004 season. The Beermen did not win a championship that year.

Chris Morris was drafted in 1988 as the 4th overall pick by the New Jersey Nets. The small forward/shooting guard remained with the Nets for 7 seasons and then moved on to the Utah Jazz. After 3 seasons in Utah, Morris moved onto the Phoenix Suns for his last season. He played in Greece and for the Harlem Globetrotters. In 2002, Morris played for the Purefoods Tender Juicy Hotdogs, a PBA team now known simply as the Magnolia Hotshots. They won the Governor’s Conference title during that run.

Al Thornton was the 14th overall pick in the 2007 NBA Draft after a strong collegiate career with Florida State. He was selected by the Los Angeles Clippers and played there for 3 years. After that, he played a season with the Washington Wizards and Golden State Warriors. Thornton bounced around between China and South America after the NBA and eventually signed with the NLEX Road Warriors in 2015. Unfortunately, the NLEX Road Warriors have yet to win a conference championship and Thornton was unable to help them win their first.

Mitchell Wiggins’s name may seem familiar, and that is because he is the father of current NBA-star Andrew Wiggins of the Minnesota Timberwolves. Mitchell Wiggins was drafted by the Indiana Pacers in the 1983 Draft. He was quickly moved to the Chicago Bulls for his first season and then moved onto the Houston Rockets for 3 seasons. Wiggins bounced around leagues before making a comeback to NBA with the Houston Rockets and Philadelphia 76ers. Wiggins debuted in the PBA with the Tondena 65 Rhummasters in 1994. The team has gone through several changes since then and now exists as the Barangay Ginebra San Miguel. Wiggins was only there for one season.

Reggie Williams has a long history of basketball with different teams and countries. Williams went undrafted in the 2008 NBA Draft and took his talents over to France. He finally got a shot in the NBA with the Golden State Warriors in the 2010-2011 season. He then dropped in and out of the NBA, going to international leagues during the seasons when he wasn’t in the NBA. His other NBA teams include the Charlotte Bobcats and Oklahoma City Thunder. In 2014, Williams went over to the PBA with the San Miguel Beermen. During this season, the Beermen won the Philippine Conference championship.

Dennis Hopson was part of the 1987 NBA Draft. He was selected 3rd overall by the New Jersey Nets. The small forward/shooting guard started out with the Nets for 3 seasons and then moved on to the Chicago Bulls for a season. His last NBA season was the following year with the Sacramento Kings. From there, he played in Spain and France before landing in the Philippines with the Purefoods Carne Norte in 1996. This was another name for the Magnolia Hotshots (as they are now known). They didn’t win any conference championships with Hopson on the roster. He eventually left for Turkey and played in several other leagues after that.

Larry McNeill began his NBA basketball career in 1973 with the Kansas City-Omaha Kings. He bounced around several franchises before playing in smaller leagues. He left the US for teams in Spain and then eventually landed in the PBA with the Gilby’s Gin franchise. McNeill set a record in PBA basketball for most points scored in a game. His 88-point game went down in history and was a classic example of an NBA player coming over and making quick work of the lesser PBA competition.

Wes Matthews is the father of NBA player Wesley Matthews. Wes was drafted by the Washington Bullets in the 1980 NBA Draft. He played there for a season before being shipped off to the Atlanta Hawks. Matthews played for teams like the Chicago Bulls, San Antonio Spurs and Los Angeles Lakes. He typically would move on after a season or 2 at the most. Matthews went over to the Ginebra San Migeul PBA team in 1991. They won the First Conference title that year. Matthews left the PBA after 1 season with Ginebra San Miguel.

DerMarr Johnson was the 6th overall pick in the 2000 NBA Draft and landed with the Atlanta Hawks. After a short stint with the Long Beach Jam, Johnson came back to the NBA with the New York Knicks and Denver Nuggets. The San Antonio Spurs were Johnson’s last NBA venture before he moved to China and France. He ended up in the PBA for the 2012 season with the Barako Bull Energy team. The Barako Bull Energy has never won a conference championship in the PBA. Johnson left the team after 1 season.