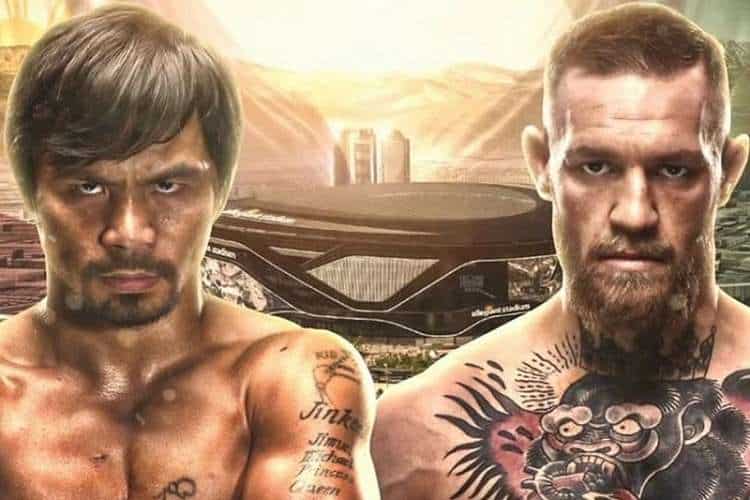 Before the announcement, McGregor, the firebrand Irishman who already fought Pacquiao rival Floyd Mayweather, Jr., in 2017, had been flirting with a return to the Octagon.

But due to coronavirus travel and scheduling restrictions – plus some behind-the-scenes drama with the UFC – McGregor fired off a short tweet on Saturday, announcing his intent to face off against PacMan in the squared circle, instead:

Anyway all water under the bridge who gives a fook.
I’m boxing Manny Pacquiao next in the Middle East.

Of course, many analysts mocked the tweet, disbelieving that the 41-year-old Filipino legend and eight-division world champion would even dignify the hotheaded McGregor with a response.

Well, Pacquiao has responded – with an emphatic “Challenge accepted!”

While we don’t know how long this fight has been building in the background, PacMan is already back in the gym, preparing for the yet-to-be-scheduled 2021 fight that will allegedly be held in the Middle East.

Pacquiao aide Jayke Joson says that while money is a motivating factor for Pacquiao accepting the fight, personal wealth is not. Pacquiao has a net worth of some $220 million and is well-known in the islands for his charitable work and donations.

This promises to be more of the same, per Joson:

“For the sake of all the Filipino COVID-19 victims, Senator Manny Pacquiao will be fighting UFC superstar Conor McGregor next year. A huge portion of his earnings will proceed to those who are affected nationwide by the pandemic.”

Pacquiao will turn 42 on December 17, while McGregor will turn 32 in July 2021. That 9.5-year delta might matter if both fighters were pure professional boxers, but martial artist McGregor is likely to be completely outclassed by PacMan, much as he was by Mayweather in their record-breaking PPV matchup.

The current boxing betting odds indicate as much:

If you want to bet on the Pacquiao-McGregor fight, the above lines are up at BetOnline, the Philippines’ number-one legal online casino and sportsbook operator.

Honestly, these odds probably won’t get much better, regardless of the fighter you choose. Some other sites have the lines much closer (for now), though these operators are not available to Philippine sports bettors.

As a result, you might as well get your wagers in early.

The only condition for this McGregor vs. Pacquiao bet to have action is that the fight is held sometime in 2021. And, of course, when the fight gets closer, you can expect over 100 boxing props to populate BetOnline’s boards, too.

It’s important to note that the venue has yet to be announced and formal contracts have yet to be signed.

However, given the fact that the bout will be hosted in the Middle East, that would indicate that the event will most likely be held in Dubai, which is the region’s only real international sporting and tourist destination.

Like The Rumble in the Jungle or The Thrilla in Manila, this one could also have a catchy name. We propose the following for the hugely anticipated PPV event:

The Buy in Dubai

Of course, for the underdog McGregor, another loss in the boxing ring is hardly a blemish when it comes with a guaranteed payday north of $30 million. That’s how much he made before PPV receipts in his exhibition fight against Money Mayweather in 2017, though it’s unclear exactly how much he’ll make for this bout.

Additionally, it’s important to note that Mayweather’s guarantee for that fight was $100 million, or a 70-30 purse split.

Still, after all was said and done, both pugilists pulled down far more money, with McGregor reportedly clearing $130 million and Mayweather taking in $280 million.

Globally, Mayweather is – deservedly or not – more popular than Pacquiao, and it remans to be seen if the Filipino legend will be able to command a similar 70-30 split. It is more likely to be a 60-40 or 50-50 split.

Further, this fight will not have quite the global hype that Mayweather-McGregor did, which means that it probably won’t generate the 5 million or so PPV buys that fight did.

Still, it’s sure to garner a tremendous PPV haul, and it’ll be substantially more popular for Filipino fans and those putting their own cash on the line at legal online Philippine sportsbooks.

For both Pacquiao and McGregor, the fight is a total no-brainer.

Neither man risks any real damage to his legacy, and while we’ve got to give McGregor his props as ever the showman, this recently photoshopped prophecy most certainly will not come to pass:

Ultimately, both men will be pulling down incredible amounts of money while promoting the sport of boxing and coronavirus relief around the world.

That in and of itself a good reason to have the fight, and boxing is especially in need of a good shot in the arm (or the bearded chin) to get fans interested again.

We’ll be keeping a close eye on this matchup and will be reporting on any changes to the boxing betting odds and any updates to the schedule and venue.

For now, though, it’s enough that both camps have agreed to the contest, and Senator Pacquiao is just as serious about this fight as he has been about any prior match in his remarkable, record-setting career.