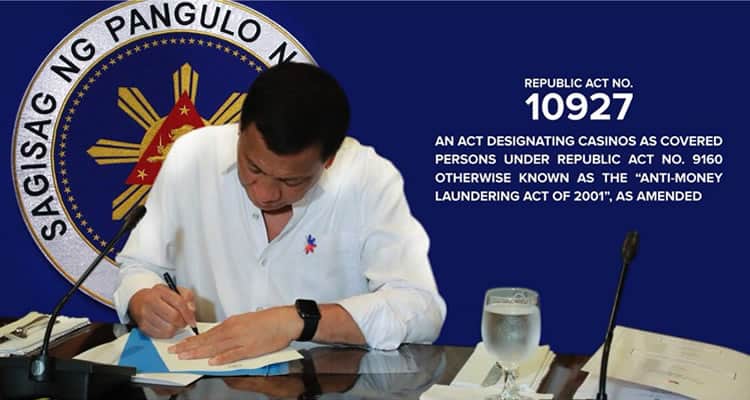 The Philippines have relieved some of the pressure facing them after formally including casinos under the coverage of a new anti-money laundering law. The nation avoids sanctions and further probing from the Asia Pacific Group on Money Laundering by making the inclusion. President Rodrigo Duterte signed the bill into law.

The bill, known as Republic Act (RA) No. 10927, was originally signed in July. The bill’s language has since been revised to include brick-and-mortar, online and shipboard gambling operators as ‘covered persons’ under the Anti-Money Laundering Act. As part of the Act, gaming operators must report any cash transaction in the casino of more than PHP5 million, or US $100,000). The Act will not have any impact on the legal online casinos that accept Filipino players operating offshore.

“Among the issues discussed during the plenary is Philippines’ compliance to the Financial Action Task Force Forty Recommendations, particularly on the inclusion of casinos as covered persons. During the annual meeting, the Philippine delegation reported to APG membership that the casino bill has been signed into law by the President. As such, the Philippines has been taken out from APG membership action,” said the Anti-Money Laundering Council on their website.

The Filipino gaming industry has been under fire before. These steps showcase their efforts to clean up their image regarding illegal financial practices. In 2013, the Financial Action Task Force took the Philippines off their list of ‘grey-area’ jurisdictions, recognizing their movements away from dirty money. The FATF further implored the nation to collaborate with the Asia Pacific Group to continue working on issues highlighted by its Mutual Evaluation Report. The Report suggested regulation of the Filipino casino sector to prevent money laundering and to enforce stringent requirements as a precautionary measure.

Philippine legislators were apprehensive about imposing such regulations. They did not want to stifle the growth of the country’s successful resort-casino industry. However, they were not left with much of a choice after the infamous 2016 Bangladeshi bank heist, in which US $81 million of stolen cash was successfully laundered through the local gaming industry.

It is unclear how the Anti-Money Laundering Act will enforce online casinos, seeing as cash transactions are more rare for options such as online slots for Filipino players, as well as blackjack, baccarat, roulette and other popular casino games. The primary focus of this bill is the land-based and shipboard casino venues, with the former the culprit in the Bangladeshi incident. Still, the bill could lead to more enforcement if the oversight measures are not up to the Anti-Money Laundering Council’s standards. If this were the case, expect possible sanctions on the local market and the Asia Pacific Group stepping in to provide oversight of their own.

Official Language of the Legislation: Republic Act (RA) No. 10927