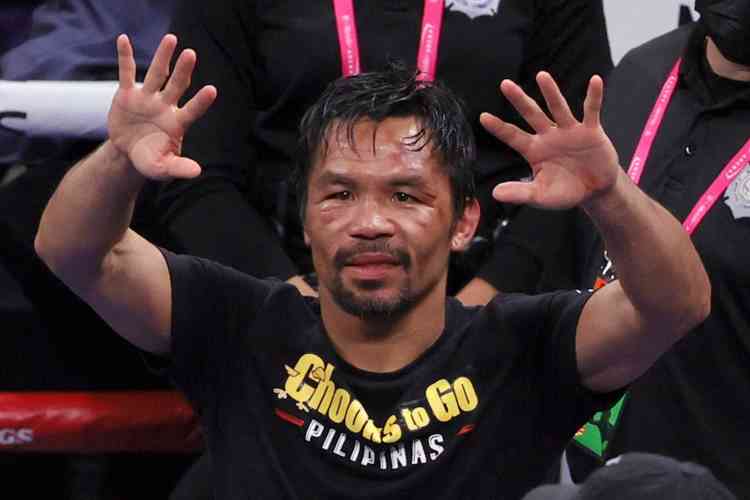 This past weekend, in what may have been his final fight, Manny Pacquiao lost a decision to welterweight WBA (Super) champion Yordenis Ugas.

Meanwhile, Ugas bettors earned a decent payday at around +300 odds.

The fight wasn’t terribly lopsided, but the 42-year-old legend has clearly lost a step, and he was outpointed by a much larger, younger fighter in Ugas.

As always, Pacquiao made no excuses for his performance, saying simply that “I did my best.”

Of course, the bout itself wasn’t necessarily the only thing on the line, with many insiders and analysts claiming that the contest was more important as a campaign stump for Pacquiao’s 2022 Presidential bid in the Philippines.

Per Sports Illustrated last Friday, the fight would have implications far beyond the squared circle itself:

“[Pacquiao] is fighting more for his political future than his boxing legacy—both this weekend and beyond.”

Elsewhere in the article, SI goes on to claim the following:

“[It’s] not an exaggeration to say that when [Pacquiao] meets Yordenis Ugas for a welterweight crown on Saturday in Las Vegas, there’s more at stake than boxing legacy.

Well, that’s all fine for some pre-fight hype, but realistically – given Manny Pacquiao’s status in his home country (and his current side gig as a Philippines Senator) – his loss in the ring will have nothing to do with his chances on the ballot.

That said, if unified welterweight titlist Errol Spence, Jr., hadn’t suffered a torn retina just weeks before the contest as scheduled – and had Pacquiao defeated the champ in a legitimate super fight – one could argue that the rush of elation in the aftermath would certainly help Pac-Man’s political aspirations.

However, a loss to a fill-in fighter such as Ugas shouldn’t have the opposite effect, even if Philippine boxing bettors lost some money.

Pacquiao brought a good fight and lost a close one.

There’s no shame in that, and the Philippines’ love for its most famous entertainer and athlete will not wane as a result of a loss at (or near) the end of an unprecedented hall of fame career.

Naturally, this reality can be demonstrated on the odds boards.

PredictIt, the political “polling” site structured like a sportsbook, has the following odds for Pacquiao in next year’s Philippine Presidential election:

Who will be elected president of the Philippines in 2022?

Obviously, the above format is different than those you’ll find at a legitimate sports betting site like 22bet or BetOnline, both of which should have odds on the Philippines election as it gets closer on the calendar.

Remember, PredictIt is not a betting site.

Instead, it’s a sort of money pool where “traders” buy and sell “shares” that correspond to an outcome’s likelihood (per site members).

Money is made only by selling shares after they’ve appreciated.

There is no house, and there are no “payouts” per se.

Here’s how it works:

Let’s say you buy a “share” of Pacquiao at 10 cents, and then he starts trending at 20 cents. You can now trade your shares at the new price and claim a small profit.

Site spending limits also prevent you from making significant money on any outcome.

This combination of factors allows PredictIt to operate legally in places that otherwise bar all online betting.

However, since online sports betting is legal in the Philippines when gambling with a legitimate offshore sportsbook, there’s no reason to use PredictIt for anything other than research.

And right now, the research indicates that the Pacquiao President odds are right behind those of favorite Sara Duterte-Carpio, current President Rodrigo Duterte’s daughter.

As for Sports Illustrated’s claim that the election would hinge on Pacquiao’s fight, that’s not been borne out.

Before the fight, on Friday, Pacquaio was 12 cents – or 12 points – behind Duterte-Carpio. Today, after Pacquiao’s loss on Saturday – he’s just five cents behind the favorite.

If you want to bet on Manny Pacquiao for President, be sure to bookmark this site, as we’re keeping a close eye on the boards and will publish betting lines the moment they hit the wire.