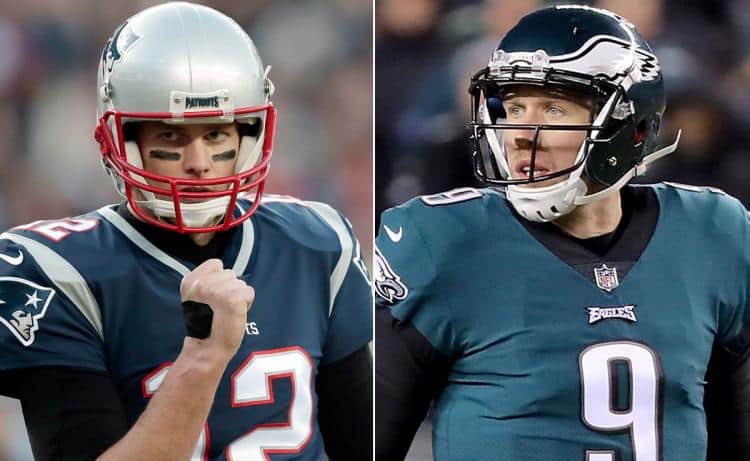 Super Bowl 52 is coming up and this year’s National Football League (NFL) battle will be against the New England Patriots and the Philadelphia Eagles. The Patriots are favored to win on just about every Super Bowl betting site there is in the spread of -4.5 to -7 points but that could just be fuel to the Eagles fire as they hope to win their first ever Super Bowl for the Philadelphia football franchise. The game will be held February 4th at U.S. Bank Stadium in Minneapolis Minnesota. Kick-off is set for 6:30p eastern time and the game will be broadcast on NBC and their international affiliates.

What Are The Odds?

The odds have changed a little over the past week, but one thing has remained consistent, the Patriots are favored to win the game. It’s no surprise to seasoned bettors based on the Patriots Super Bowl win record but given the Eagles strong defense some people must be thinking they could possibly pull it out. Super Bowl betting has been trending over the internet this past week and currently the spread is Pats -4.5 and Eagles +4.5, the money line is Eagles +175, Pats -205, the totals are over/under 48. Brady has let down bettors before when he lost Super Bowl 42 to the Giants after a perfect regular season that lead the Patriots to the Super Bowl. The Patriots were favored to win big (-450 money line) but ended up losing near the end of the game in what is now considered one of the biggest NFL upsets of all time.  Most of the reputable sports betting sites are trying to keep the lines balanced as a large number of bets are being placed on the Eagles despite the fact that the Patriots are favored for the win.  Seasoned bettors know that an underdog upset can pay out much nicer than the favored team’s victory.

The New England Patriots are no stranger to the NFL’s big game. This appearance will be the 8th time Brady has took his team to the Super Bowl solidifying his reputation as the greatest quarterback of all time. He already has won the game 5 times, which is a record, and this could be number 6. Tom Brady is now 40 and players around the league are starting to wonder if he will ever retire. However, even without Tom the Patriots are still stacked with superstars including Rob Gronkowski, Julian Edelman, Dont’a Hightower and more. The Patriots are a solid team under the graceful eye of head coach Bill Belichick. It doesn’t matter who you are the Patriots are going to be a hard team to beat.

The Eagles have been the underdogs since their starting quarterback Carson Wentz was injured late in the regular season. A lot of people threw in the towel on them but Nick Foles took over and lead his team to Super Bowl 52. The Eagles have one of the best defenses in the league and if they play well, the Patriots will have problems moving the ball. The Eagles also have a good offense, but LeGarrette Blount will have to have a good game if they intend to move the ball consistently on the Patriots defense. The Eagles were underdogs in every post-season game they played but earned their way to the Super Bowl so being labeled the underdogs now is nothing new.

Nick Foles use to be the starting quarterback for the Eagles before he was traded a few years back. He eventually made his way back to the Eagles this season as a back-up quarterback. Foles looked good in the playoffs and miraculously lead his team to the Super Bowl, something many people doubted. Now he is playing for a Super Bowl ring and the chance to beat Tom and the boys. If the Eagles win this game, it will be considered a true-life Cinderella story for the team with the back-up quarterback. Foles was contemplating retirement before this year so we will see if anything changes since he has been giving this opportunity.

Propositional bets are fun bets that usually have no ties to the outcome of the game but are based around the game. Some of examples of prop bets are “Who will win the coin toss” or “Will the Eagles score the first touchdown”. Prop bets are used in many other sports but there are all kinds of crazy bets you will find for an event as big as the Super Bowl. It’s a fun way to get more attached to outcomes surrounding the game.

If we learned anything from last years Super Bowl it would be the game is not over until the final whistle. Tom Brady and the Patriots looked defeated going into halftime under 21-3 against the Atlanta Falcons in Super Bowl 51 but they ended up winning the game 32-28 in overtime.

The Eagles need some things go right for them to win the game. Whether its turnovers, special team plays or penalties, they will need all the help they can get. The Eagles have looked really good during the playoffs which is surprising considering most people thought they were going to fold due to the quarterback injury. The Eagles defense is hot right now and that might cause some problems for the Patriots offense. Brady is known for his short passing game, if they can stop that the Eagles will likely win.

The Patriots are hurt on both sides of the ball especially the offense with star receiver Julian Edelman out for the season. Rob Gronkowski will be back for the big game, a sigh of relief for Patriot fans. Of course, Tom Brady, most of us are sick of hearing that name by now but give him credit, he has lead his team to 8 Super Bowls and produced 5 winning rings out of it so far (6 if they win Super Bowl 52). You might not like him, but the record books will say he is the greatest NFL quarterback of all time or at least until someone wins more Super Bowls.