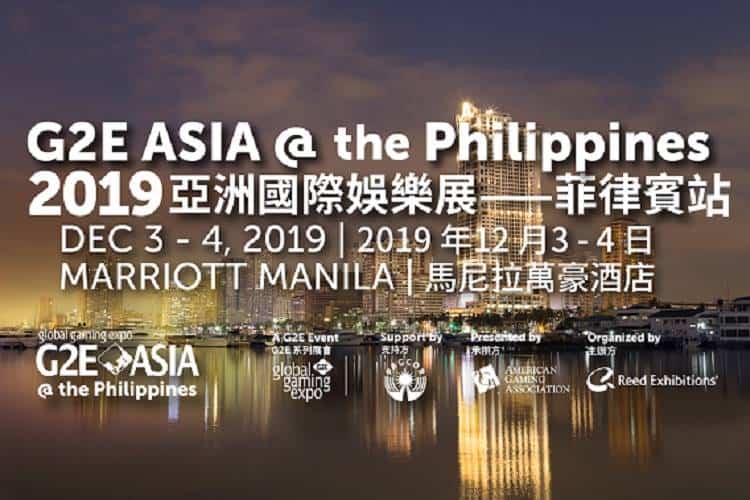 Despite ongoing disagreements with Beijing and a local enforcement initiative against tax-dodging Philippine Offshore Gaming Operators (POGOs), the Philippines seem to be moving full speed ahead in embracing the burgeoning online gambling industry.

From December 3-4, Manila will be hosting the Global Gaming Expo (G2E) Asia. The scheduled venue for the convention is the Manila Marriott Hotel, and there will be roughly 100 exhibitors on hand. Among the exhibitions, of course, will be global casino executives looking to expand their operations, both in and around the Philippines.

“With this event, we are bringing new opportunities for growth and innovation to the Association of Southeast Asian Nations emerging markets, including the Philippines, Singapore, Thailand, Malaysia, and Indonesia gaming entertainment industry.”

G2E, established in 2007, has become the premier industry trade show for the Asian gaming entertainment industry, and with the Philippines hosting the festivities this year, it’s clear that the country plans on sticking with its POGOs during conflicts with neighboring China.

The Philippine Amusement and Gaming Corporation, or PAGCOR, has been tasked by President Rodrigo Duterte to continue supporting the growth that the industry needs to maximize government tax contributions.

Andrea Domingo, Chairwoman and CEO of PAGCOR, believes that the December expo will do just that.

“PAGCOR continues to pursue its vision of becoming the top gaming destination in this part of the world. Having events such as the G2E Asia reflects the region’s exciting and upward growth in gaming and entertainment.”

Of course, China is likely displeased by these developments. Claims of money laundering, assaults, and even kidnappings related to POGO operations have been rampant out of Beijing, with Philippine authorities promising to crack down on offenders.

President Duterte minced no words about the alleged POGO-related offenses, issuing a stern warning to perpetrators:

“There are foreigners who come here to play their trade, lending money, and if the debtor cannot pay, they kidnap and sometimes they ask for ransom. And even with the delivery of the money…they just go ahead and kill the victim.

We’re good friends with everybody, but I will not hesitate even to tell your ambassador that I killed your idiot citizen because he was f****** in my country… To me, you are just another carcass.”

The criminal situation aside, many Filipinos are growing impatient with the cultural change brought on by POGOs and their Chinese clients and labor forces, increases in local wealth and revenue notwithstanding.

Speaking with the Nikkei Asian Review, one local explained the situation in her village, saying that the POGOS “are causing inconvenience. It’s always traffic in the morning and they throw their trashes anywhere. Filipinos can’t even work in online casinos. So why did they come here?”

Right now, the Philippine government receives benefits from hosting the POGO industry, but the Philippine people themselves don’t see those tangible benefits on a day-to-day basis.

One of the potential solutions, of course, would be for the Philippine government to allow its own citizens to work at and operate POGOs, which are now run by Chinese migrants.

However, it is unclear if such plans are in the works, as the Philippine government – including President Duterte – is adversarial to the idea that natives should be allowed to participate in the industry.

Hopefully, that will change in the future.